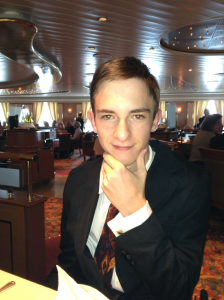 My career as a political commentator started  in March of 2008. I was only in middle school back then, but I had fallen in love with politics when I was in elementary school and found my Conservative beliefs at a very early age. As a middle school student about to go into to high school, I was frustrated that none of the media outlets that were targeted for  teenagers and young adults had even one Conservative on their programs, blogs, etc. I had also been listening to The Rush Limbaugh Program for good period of time at that point. Limbaugh’s quick wit and fresh rock ‘n roll DJ like personality made hearing and discussing politics fun to me! Yet, Rush’s  keen intellect and passion was also very inspiring to a young teenage boy. (ME!)  One night I was experimenting with audio recording software on my computer. My frustrations about the unfair liberal bias that teenagers and young adults were given were coming to a boiling point. Just for the hell of it, I decided to record my own “Talk show” and try my hand at being like Rush Limbaugh. The show lasted around 15 minutes and I enjoyed every second of it! I e-mailed the file to my mother who said “this is pretty good for your first one”. I decided to officially give the talk showbiz a stab. My first show was titled The Whitfield Nation. It was hosted on what I called The Whitfield Radio Network. (I loosely based it off of Rush Limbaugh’s Excellence In Broadcasting Network). What began as a mere experiment soon became my greatest passion! The first show ran until January 2011. This  was mostly  because of our podcast hosting providers change of service options. The show’s format was beginning to get stale too.  I decided to pull the plug on Whitfield Nation, suspend The Whitfield Radio Network, and come up with a new show that would be better suited to the options of the podcast provider. I returned that April with The Whitfield Radio Network‘s newest show, The Whitfield Analysis!  So far, the show has been awesome!

In December 2011, I decided to disband the Whitfield Radio Network and start a new organization from the ground up. My partners Trevor Johnson, Luke Kininski and I, discussed  and planned what we wanted our new media organization to look like.

On January 1st, 2012 Next GEN Conservative was launched!

Our goal is to inform more conservatives about Web 2.0 technology and how it can help The Conservative Movement! The organization also acts as an Internet Media Network!  The Whitfield Analysis continues to air on NGCR (Next GEN Conservative Radio), along with some new shows.

I LOVE  being a talk show host! But it is you the audience, that makes this job so unique and special to me! Since I began in 2008, other Conservative teenagers have decided to stand up and fight for their voice and beliefs! I feel so blessed to be one of the earliest members of the “Conservative youth movement”.

Thank you for your continued support and God Bless America!

Begin typing your search above and press return to search. Press Esc to cancel.